The perks of the writer's job include getting to read advance copies of new books and I recently had the absolute pleasure of reading Sh...

Yesterday my book, Women of Power in Anglo-Saxon England, was published by Pen & Sword Books. But it wasn't the only one they published yesterday. I'm delighted that Sharon Bennett Connolly's Ladies of Magna Carta was also released and we decided to interview each other, using the same questions. You'll find my answers on her BLOG. Meanwhile, here are Sharon's: 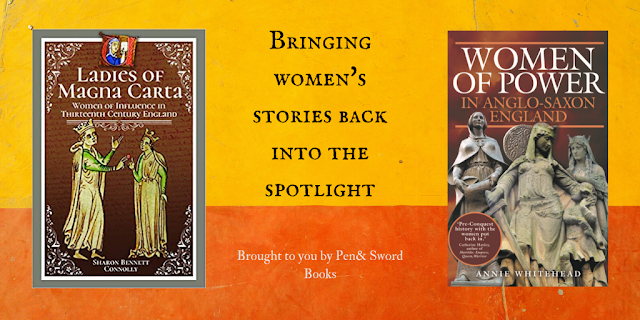 Welcome to the blog Sharon. Firstly, what motivated you to write the book?

I love writing and I love history. The 13th century and, in particular, the reign of King John, is a fascinating era. It is also a time when women stand out as being strong and influential on events. In my first book, Heroines of the Medieval World, I had included the stories of Nicholaa de la Haye and Matilda de Braose, both remarkable, independent women. Nicholaa successfully defended Lincoln Castle in no less than 3 sieges, the last against a joint army of English rebel barons and invading French.  Matilda had also held a castle under siege, but is remembered more as King John’s victim, starved to death in her cell, having chewed on her dead son’s cheek to survive just that bit longer – no one said medieval history was not gruesome! The lives of these two women deserved to be told. And as I looked into the era, the more remarkable women I found.


There are several women whose stories deserved telling, such as the Scottish princesses who were hostages of King John and John’s own wives and daughters. William Marshal was also a big part of the Magna Carta story, and the lives of his five daughters, who married some of the greatest barons of the age, were revealing – several found themselves married to men on the opposing side of the political spectrum to their father.

I wanted to know how these women reacted to the events that was going on around them, how much influence – or not – they had on their men and history. And I wanted to tell their stories.

What were the research challenges?

As you know, Annie, it’s very hard to get much information on women in medieval history. Most of the chronicles talk about the men and only mention women in passing. So, you have to learn to read between the lines, work out, from the little information you have, where the women would have been and what they would have been up to.


Another challenge is that a lot of the chronicles are written in Latin – and I don’t read Latin. At least, I didn’t think I did. I am fluent in French, which seems to give me enough understanding of Latin to be able to summarise the texts, but not enough to do a thorough translation. And Google translate seems to have less understanding of Latin than I do.

On the plus side, research has never been easier. With the internet, even 1,000-year-old chronicles are at your fingertips. And the greats, such as Orderic Vitalis and William of Malmesbury, are there to be read, from the comfort of your own laptop.


Do you have a particular favourite amongst the women you’ve written about?

I found all the women in the book fascinating. I loved the image of family in the stories of William Marshal’s daughters, how they were asked to sing at his bedside when the great knight was dying. I found Isabelle d’Angoulême particularly vexing. I wanted to feel sorry for her, married before she was even a teenager and thrust into King John’s bed and English politics. But then, she deserted her own children almost as soon as their father was buried, starting a new life and family in France, and only calling on her son, Henry III, when she wanted something. It was hard to feel any sympathy for her in the end!


My favourite is Nicholaa de la Haye. I have been researching her for about five years now. She is an incredible woman who managed to successfully defend Lincoln Castle against no less than three sieges; in the first one her attacks gave up and went home, in the second, she paid them to go away and in the third, the great William Marshal rode to her relief.

Nicholaa was the first ever female sheriff in England and a staunch supporter of King John. And yet, four days after the 1217 Battle of Lincoln, which was the culmination of a six-week siege of the castle, she was relieved of her position as castellan of Lincoln Castle in favour of King Henry III’s uncle, William Longspee.

I’m not sure what the men expected of a woman who had already proven that she would not surrender, but she rode straight to the ten-year-old king and asked for her castle back – and got it.

Can you tell us briefly about your other books?

Ladies of Magna Carta: Women of Influence in Thirteenth Century England is my third book. My first was Heroines of the Medieval World, which was a series of short biographies of some of the most remarkable medieval women, from queens to nuns and from warriors to mistresses. My second, Silk and the Sword: the Women of the Norman Conquest, was a study of the events of 1066, and the years either side, focusing on the women of the era.

I am working on my next book at the moment – it is due into the publishers at the end of the month. It is a biography of the Warenne earls of Surrey, from the Norman Conquest to the last earl’s death in 1347. The family were one of the most prominent in medieval England, marrying into the royal families of England, France and Scotland. They had extensive lands stretching from the south coast to West Yorkshire and were participants in most of the major events of medieval England, from the Conquest itself to the Magna Carta and the Scottish Wars of Independence. As with all medieval lords, their story is replete with high drama, politics and a little love.

Thanks so much for chatting today! Where can people find you on Social Media and where can they buy your books? 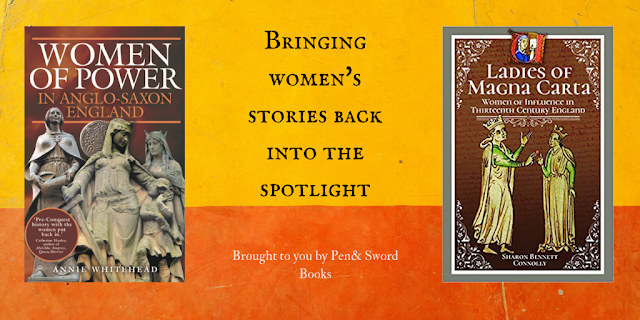 Huge congratulations to Sharon - watch out for my review of her wonderful book, coming soon!
at May 31, 2020