Review: Blossom on the Thorn by Loretta Livingstone 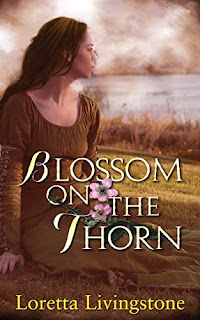 1195
"I should have had nothing to do with those accursed Angevins. I should have run like hell in the opposite direction."

Giles de Soutenay can scarcely be blamed for his disappointment. Promised an heiress by Queen Eleanor, he is dismayed to discover that, although young and attractive, his bride has all the warmth of a stone effigy.

For the newly widowed Isabella, the reality of a new husband is no cause for celebration. She will do her duty but no more. She will give de Soutenay no reason to complain but he will not have her heart, for any belief in love and tenderness died during those brief years of her first marriage. However, she has reckoned without Giles' perseverance.

After the snows of winter, spring brings hope, until the arrival of a stranger threatens Giles and Isabella’s blossoming happiness. A stranger who might tear them apart before they have truly found each other. Only if Giles can learn patience and Isabella can learn trust can they hope to find lasting love.


So runs the blurb for this, the third in Loretta Livingstone's Out of Time series. The first two books are 'time-slip' novels but this third is not (apart from one brief mention of a 21st-century character in the abbey). I read this as a standalone, but it's as well to know that the other books are time-slips, otherwise that scene in the abbey might prove something of a shock!

But, that said, all the other characters are from the twelfth century and behave as such. By which I mean that Ms Livingstone has clearly done first class and painstaking research. I was never once jolted out of the medieval world and each scene was beautifully and accurately depicted. The hall of Giles and Isabella teems with medieval servants going about their medieval chores, and all are clothed according to the fashions of the day. Isabella is very much a woman of her time. She has guts, and fortitude, but nevertheless she is a medieval lady, not a modern woman, and her reaction to what happens to her never strays beyond the limits of the options available to a woman of her rank during that period.

Giles is a bit of an anomaly. He's certainly a surprise to Isabella; I wondered at times whether his attitudes have been shaped by his coming into contact with modern-day characters in the other books? I guess I'll have to read them to find out! When he exacts revenge though, he is every inch the medieval soldier. So once again we have drama, but that which sits perfectly in its period setting.

There are plot twists and turns, despicable acts, and characters who left me itching to watch them get their comeuppance. At the heart of this story though is the romance between the two characters and it's a satisfying story arc which sees them struggle with initial wariness, disagreements, misunderstandings and the efforts of others to thwart them and drive a wedge between them.

I enjoyed watching Isabella grow and develop, and appreciated the occasional reminders of just how young she is. This of course was not unusual, and it made me stop and think just how much this poor lass has endured by the time she's seventeen.

Ms Livingstone knows the world she's writing about, but uses her research sparingly; she tells us what we need to know but mainly uses her knowledge of the period to paint the scenery. The dialogue flows naturally, and nothing jars.

I especially loved the scene involving the window. Sometimes it's nice to be reminded that people from history were modern-day characters in their own world. I'll say no more, except that it made me smile that Giles and Isabella have a lovely moment of 'keeping up with the Joneses'.

Romantic fiction is perhaps not my usual read, but I have to say that this is a wonderful example of its genre.

Find it on Amazon UK and Amazon US
and find more about Loretta HERE
at August 23, 2019