Review: The Thieves of Threadneedle Street by Nicholas Booth

"Late in 1873, London was gripped by the astonishing story emerging from the highest court in the land, where four American conmen were on trial for attempting the greatest financial scam the world had ever seen. Their leader, Austin Bidwell, had hatched a plan of devilish ingenuity that, were it not for one tiny stroke of bad luck, would have ended with him walking out of the Bank of England with £1 million in cash a heist that would have plunged London into financial meltdown and put Bidwell's name alongside the legends of criminal history."

So far, so intriguing. But the story is not so straightforward... 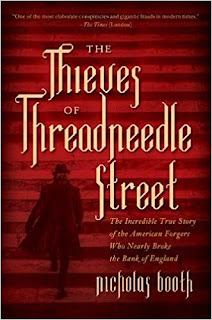 1st March, 1873: Bank of England cashier, Frank May, notices that something is wrong with a bill of exchange which has been accepted and paid out. It is, in fact, counterfeit, and is not the only one of its kind. The main problem is that officials think they are looking for a man named Frederick Warren who, incredibly, has been able, despite having no address or references, to 'cash' this and many other such bills.

So begins one of the most bizarre stories I've ever read, and astonishingly, it's all true.


Nicholas Booth has traced the extraordinary tale of the Bidwell Brothers and their associates, all of whom used various aliases (hence the use of the name Frank Warren), their dealings with Pinkerton's Detective Agency, their various fraudulent schemes and their frequent ability to escape the law, even incarceration.

The narrative jumps back and forth, across time and across oceans, but the story absolutely has to be told that way. It comes together slowly, piece by piece, much as it did to 'Pink' Pinkerton and the others following the forgers' trails.


As an author myself I can see what a difficult book this must have been to put together. Assembling all the evidence must have taken  huge amounts of research, and then it must have been a daunting task putting all the various strands together and deciding how best to tell the tale.

I'm happy to say that Nicholas Booth has pulled off an incredible trick, introducing each character and then going back in time to show how they arrived at their part in the overall tale, and what happened to them along the way.

Much of the story is lifted from the court transcripts so we read what was actually said, verbatim, as these thieves finally got their comeuppance. What is especially delicious is that we know almost from the outset who the forgers were, but I was captivated as I read, desperate to know how they were finally brought to justice.

For it transpires that this was not their first heist. From train crashes to prison breaks, this story romps along, using the criminals' own memoirs, whilst casting doubt on some of their more outlandish boasts.

I confess to not understanding some of the finer details of the scams, but what I did marvel at was how utterly simple some of them were. But for a forgotten signature, the thieves might even have got away with their most audacious plan, that of relieving the Bank of England of a substantial amount of money. 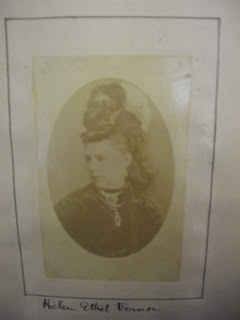 Newspaper reports, surviving photographs, court drawings - all are used to great effect. This is history, but not so far removed that these characters are necessarily 'distant'. One feature of the tale is that the women were, I think it's fair to say, sorely used. Austin Bidwell's wife was dominated by her redoubtable mother, and seemed willing to believe anything her husband told her. When the truth emerged, she was a fragile and broken witness. 'Nellie' Vernon was cut from different cloth, and it was delicious trying to work out how much she really knew about what her 'husband' George Bidwell was up to.

It is a fascinating tale and if one were to write this book as a novel, the plot would be fiendishly complicated and even less credible. I was astounded at how much this gang got away with. Even in their early days, they managed to persuade suppliers to give them stock on credit, with no intention of ever paying for the goods. It almost seems a shame that such audacious, clever people should have been caught out by such a simple mistake.

This is a compelling piece of history. But that doesn't mean that it was a gift for the author. It must, as I've said, have been a daunting task researching all the details of the elaborate scams and then presenting it all in such a readable way. Congratulations to Nicholas Booth for piecing it all together and telling a ripping yarn.

[Thanks to the author who supplied the above images. I must make it clear though that he did not supply the book, which I bought myself.]
at August 30, 2019