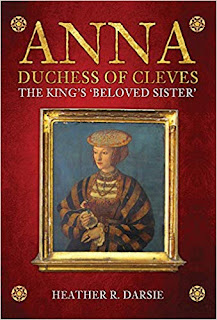 We all know about the list of Henry VIII's wives, and fourth on that list is Anna - more usually Anne - of Cleves. She was the 'Flanders Mare' whose portrait engaged Henry's interest, but exaggerated her beauty, so that when he saw her he was repulsed. He divorced her, and executed Cromwell who had negotiated the marriage deal. And that was all we need to know about the fourth wife, right?

Heather Darsie's new book not only lays aside those erroneous assumptions but reminds us that Anna of Cleves had a life both before and after her marriage to Henry. This wonderful new book explains the backdrop of the political situation on the Continent, starting with Anna's forebears, and exploring the political situation in the lead-up to and during her marriage to the king of England.

It was a political marriage, one which in retrospect was a bad move for England. That Cromwell did not foresee the potential danger for England in this alliance with Cleves is more pertinent than Anna's rumoured ugliness and, in fact, 'rumoured' is the crucial word here.

Darsie explains how Anna's reputed lack of beauty has come to be embedded in the histories as fact, and points out that Henry continued to visit her after their divorce. I was intrigued to discover that after poor Catherine (here spelled Katheryn) Howard's demise, there was strong speculation that Henry would return to Anna.

I knew that the 'Flanders Mare' was provided with lands and estates, and lived comfortably. I did not know about her relationship with Henry's children.

Anna of Cleves survived not only Henry, but all of his other wives and Darsie's speculation about her influence on the young Elizabeth I makes for fascinating reading.

This lively book is not over-prone to speculation and what if's, though. It is thoroughly researched, and is infused with the author's great love for her subject. The troubled politics of Europe are explained in an easy but detailed manner and effective use and analysis is made of the primary sources.

An entertaining read, and one which I'm happy to recommend.