Continuing our monthly series, where I ask authors four questions and ask them to supply three pics and two links, this month it's the turn of Jayne Davis:

Hi, who are you?
I’m a getting-on-a-bit Brit who’s had several careers. I loved reading Jane Austen and Georgette Heyer from my teens, and always wanted to write fiction. There were a few abortive attempts at novels, which thankfully never saw the light of day, and in the meantime I became an engineer, then a teacher, then a publisher (of school text books) and finally a freelance writer (school text books again). Eventually I tried again, summoned up the courage to submit my work for other people to review, and finally knocked it into good shape for publishing.


When I first started trying to write novels, I used to worry if I’d ever have enough ideas. Now the problem is having too many ideas and having to sift through them, and to concentrate on one at a time!

What do you write about?
I’ve always been a sucker for romances with happy endings, with believable characters and events, so that is what I try to write. I love the Regency era – using the term in its broader sense, from the 1790s until Victoria came to the throne. This era has great scope for story-telling, too, with Britain at war almost continually from 1793 until 1815. There was a lot of skulduggery and spying going on, many army and navy wives and sweethearts having to cope while their loved ones were away, and also the prospect of characters having to deal with injury. The status of women in those times also gives my heroines something to struggle against – there was huge scope for unsympathetic or jealous relatives to cause social or financial harm. Stakes in marriage were high – the wife had no money of her own after marriage, only what her husband gave her, and if they separated (divorce was very difficult and expensive, and so very rare), he had sole rights to the children and could deny her all access. And there were no trains or telephones, especially not mobiles – there are so many more story possibilities when you cannot just press a few buttons and talk to someone miles away.


Which character will we love to love, and why?
The answer to this would depend when you asked me—I’m half in love with the hero of whichever book I’m working on. But as I want my readers to love my main characters, it’s probably cheating to say that, so I will put forward Sergeant Webb.

My first novel, The Mrs MacKinnons, concerns Major Matthew Southam, a soldier returning to England after a traumatic experience in India. When I started writing the story, Webb was just a means of getting Matthew out of prison and back to England. Then he sort of elbowed his way into the story, and became a significant secondary character (that’s when I knew I was nutty enough to be an author, when characters start doing things for themselves!). He’s had a traumatic upbringing himself, but has turned out to be a decent man, if a little sharp around the edges – a rough diamond.
The book I’m currently working on (Playing with Fire), has two secondary characters that did something similar – worked their way into my affections and had a bigger part in the story than I initially thought. So much so that there will be a following book that features them (one as the male lead, the other as a main secondary character).

Which character will we love to hate, and why?
In The Mrs MacKinnons, Charles Southam, Matthew’s half-brother by their father’s second wife. He’s jealous that Matthew has inherited their father’s estates and wishes Matthew had died in India. He’s cheated Matthew and even his own full brother, and rather than even thinking of trying to make a living for himself (as most second sons had to), he resorts to devious means to try to get his hands on more money, in spite of having had a very generous allowance for years. 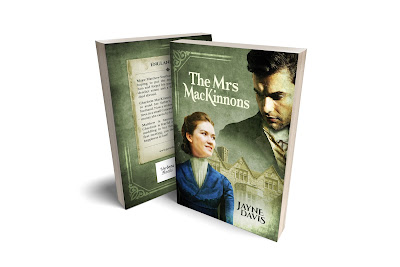 Thank you so much for talking to us today Jayne!
Here are Jayne's two links:
Amazon
Website