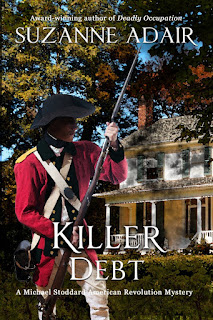 AW: Welcome to the blog, Suzanne. You write about the American Revolution and when I first read this I thought to myself Yes - what a brilliant era to pick. Excitement, danger, idealism, great costumes... And my second thought was - I don't read of many authors writing historical fiction like this. Am I, as a Brit, uninformed, or are you blazing a trail here?

SA: Neither, actually. A number of authors write fiction based during the American Revolution. I have the only mystery series set in the southern theater of the war. I won’t deny, however, that other historical settings are far more popular for fiction: 18th-century Scotland, Elizabethan England, the American Civil War, Regency and Victorian England, and so forth.

The major presses based in New York City are reluctant to publish fiction set during the Revolution. American high-school history class has so thoroughly populated the period with bewigged, boring men spouting unintelligible political philosophy that publishing professionals are convinced the time period “isn’t sexy enough.” (That’s a direct quote I heard from a New York literary agent.)

Also, the American Revolution is hallowed ground for many people: the Great Founding Myth. Authors are afraid to rock the boat and challenge stereotypes and anecdotes. They stick with what they think they know. The result is bland fiction that reinforces all those “bewigged, boring men.”

Yet the thirteen original colonies and surrounding territories had an incredibly diverse population: multiple ethnicities, religions, and political views. There are so many stories waiting to be told for those who are willing to do the deep research and help make history three-dimensional.

AW: I know that you don't just write books, but that you run a successful blog. For those who aren't aware, can you explain the ethos behind your blog, Relevant History, and what makes it different?

SA: Back in 2011, I was searching for a way to give visibility to authors of historical fiction because I felt they were underrepresented in the literary spotlight. At the same time, I was considering shutting down my blog because it wasn’t getting much traffic. I asked several people who were devoted readers of my books what would interest them in my blog, make them come back again and again to read what was there. They said history, any time period of history, as long as it’s the provocative, horrific, or hilarious bits that get excised from high school history class. In other words, what connects us to people of past eras and makes history relevant to the 21st century.

Knowing that I didn’t personally have the time to do all that research and write all those essays, I set up some guidelines, put the call out to authors, and, when I had a few guests scheduled, launched the feature on my blog. My blog traffic skyrocketed, so I kept scheduling Relevant History posts. I also developed a quarterly newsletter that’s mostly publishing news my Relevant History author guests share about their book releases, discounts, freebies, and so forth.

I’ve taken a short hiatus from Relevant History this year, March–May, to run a successful crowdfunding campaign for Killer Debt, book #4 of my Michael Stoddard American Revolution mysteries, then release the book. Relevant History posts will resume in early June. It’s my pleasure to help other authors with visibility. And the history I’ve learned from reading posts for this feature has been amazing.

SA: Great question! The Mysteries of the American Revolution trilogy came first. While I was researching the final book of it, I learned that Crown forces of the 82nd Regiment of Foot sailed out of Charleston, South Carolina and occupied Wilmington, North Carolina in January 1781. This small regiment of redcoats (only about 200 soldiers) occupied Wilmington through November 1781 and was successful at snarling the Continental Army’s strategies for much of that year.

This astonishing history wasn’t being taught in American public schools—I suspect because the redcoats did a really professional job on the campaign while the patriots were disorganized and ineffective throughout most of it. We don’t do our kids justice by teaching them only about our successes. It’s a good idea to also study where opponents have excelled and why we’ve failed. Because many people learn history today by reading historical fiction, I decided to create the Michael Stoddard American Revolution Mystery series as a vehicle for the story of 1781 in North Carolina.

Michael Stoddard, a fictional, twenty-something junior officer in the British Army, appeared in all three books of the original trilogy as a minor character. I transferred him to the 82nd Regiment in Charleston in time for the King to pay his fare to Wilmington with the rest of the regiment. There the 82nd’s commander, Major James Henry Craig, makes Michael the regiment’s criminal investigator (see book #1, Deadly Occupation), thus launching Michael’s career as a detective. And North Carolina’s Revolutionary history, the driving force for the series’ external conflicts, gets the spotlight in each book.

AW: That's a really interesting concept! Can you tell us about your new novel?

SA: Certainly. Killer Debt is set in July 1781, in Wilmington, North Carolina, when the 82nd Regiment was at the height of its power. Aided by several thousand North Carolinians who were loyal to King George III, the 82nd blocked the Continental Army from moving troops and supplies between Virginia and South Carolina overland through North Carolina, effectively stalling the war for the better part of the year. It was a great time and place to support the Crown.

Since there’s a murder or two in Killer Debt, and Michael Stoddard is a criminal investigator, he must make sure that justice prevails in the end. However in this book, Michael, who’s generally a by-the-rules sort of fellow, receives a jolt to his self-respect when he must implement a different kind of justice.

In Killer Debt, I also showcase an amazing piece of history that exemplifies the ancient wartime code of honor under which both the British and Continental Armies operated for most of the war. Wartime code of honor—what’s that? Set aside your cynicism. The last time that code of honor operated was early in World War I, so opponents extending courtesy to each other isn’t something you’d remember. But what an excellent subplot it makes in Killer Debt.

Thank you, Annie, for this opportunity to appear on your blog!

AW: Thank you, Suzanne, for telling us all about your books and blog.

Bio
Award-winning novelist Suzanne Adair is a Florida native who lives in North Carolina. Her mysteries transport readers to the Southern theater of the American Revolution, where she brings historic towns, battles, and people to life. She fuels her creativity with Revolutionary War reenacting and visits to historic sites. When she’s not writing, she enjoys cooking, dancing, and hiking. Recently she was appointed by North Carolina’s Daughters of the American Revolution to a state-wide committee formed by the Department of Natural and Cultural Resources to help share information about and coordinate events of the Semiquincentennial. Killer Debt, book #4 of her Michael Stoddard American Revolution Mystery series, was released 9 May 2018 after a successful crowdfunding campaign during March 2018. Check her [http://www.SuzanneAdair.net/]web site for the latest information.


Book description
A slain loyalist financier, a patriot synagogue, a desperate debtor. And Michael Stoddard, who was determined to see justice done.
July 1781. The American Revolution rages in North Carolina. Redcoat investigator Captain Michael Stoddard is given the high-profile, demanding job of guarding a signer of the Declaration of Independence on a diplomatic mission to Crown-occupied Wilmington. When a psychopathic fellow officer with his own agenda is assigned to investigate a financier’s murder, Michael is furious. The officer’s threats to impose fines on the owner of a tavern and link her brother to the financier’s murder draw Michael into the case—to his own peril and that of innocent civilians. For neither killer nor victim are what they first seem.