It's the beginning of the month and that means excerpt day. First up we have an excerpt from a new release, from Trisha Hughes, Virgin to Victoria

"Despite her amazing legacy, Elizabeth failed England in one vital area. She never married, nor did she leave an heir to the Tudor dynasty. In making this one fateful decision, the Virgin Queen left the path open for a take-over by the Stuarts and life would never be the same. In the future, Victoria would not ask to be Queen. It was thrust upon her by a series of events that removed all others who stood in line for the throne. She assumed it reluctantly and, at first, incompetently. Parliament was sure that the 18-year-old could be relied upon to leave the job of running the country to the professionals. Couldn't she?" 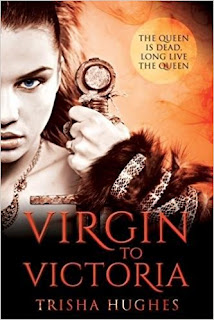 There's more detail on this new release and where to find about more about the author on the News and Announcements Page.

Our other excerpt this month is a little lengthier, and it comes from Don Jacobson, who introduces himself on our Regency/Victorian page

This Excerpt is © 2018 by Donald P. Jacobson. Republication or other use of this work without the expressed written consent of the creator is prohibited. Published in the United States of America.

The Dowager Countess of Matlock has departed from Longbourn after her meeting with Mr. Thomas Bennet. She is now in the offices of Wilson and Hunters in Lincoln’s Inn in the City where she is meeting with the Bennet family’s London solicitor, Mr. Frederick Hunters, from another branch of the Bennet family tree. I this excerpt he addresses the bane of Mrs. Bennet’s existence…the entail on Longbourn.

Mr. Hunters' acumen brought Kitty up short—not that she expected to continue her deception with the one man Papa seemed to trust beyond all others in this current world, even more so than Uncle Edward Gardiner. Hunters’ incisive manner clearly brooked no prevarication on her part, so she offered none, but rather spent the next twenty minutes briefly revealing her history in the future. All the while, she clutched the massive gold signet ring.

When she had finished this day’s second recounting of her experiences in the Twentieth Century, Hunters leaned back in his chair, hands curled over the knurled ends of the arm rests, looking much as kings of old may have when they viewed an emissary from a distant kingdom. His eyes bored into hers from beneath beetled brows.

At her expectant look, he said, “You, therefore, are the fourth of Bennet’s five…Catherine Marie. I had not known of your junior sister’s behavior, and I cannot suggest that I even remotely approve. The damage to the family would have spread far beyond Longbourn. Conceivably both the Collins and Hunters lines could have been tainted.

“But, we must accept that her die has been cast and, while eggs were assuredly cracked, it does appear that a soufflé has been made. All of us owe a considerable debt to your brother Darcy.

“However silly your sister may have been, I cannot entirely condemn her…or, for that matter, your mother. Lydia was full young to be out, but that is only the result of your mother’s terrible fear of losing her home and having her children suffer in the event of your father’s demise.

“And it all circles back to that contemptible entail Richard Bennet put on the property.”
Hunters paused and motioned to Kitty, indicating he wished her to return his ring. She leaned forward and slid it back across the walnut expanse.

Once he had replaced the device upon his right ring finger, the Master of Lincoln’s Inn continued, “My Uncle Richard, your father’s grandfather, placed the entail on Longbourn right after his heir, George, was killed in a logging accident and Samuel had not been heard from for months while he faced the French in Braddock’s force in the Pennsylvanian wilderness. The middle child, a daughter, Maude, had already married that slimy man, William Collins.

“Richard was absolutely terrified that he himself would expire, that Sam would not survive the army, and that Collins would ultimately control everything through Maude. In Uncle Richard’s eyes, the entail would ensure that Longbourn—and the Wardrobe—would safely pass to his younger sister’s line and through to her eldest son: me.

“Once Samuel returned home and fathered not one, but two, sons, the entail seemed moot. That was, until Edward decided to vanish—Thomas told me that he used the Wardrobe. Then it all fell to your father.

“And we know how that turned out; a Collins will find fortune.” 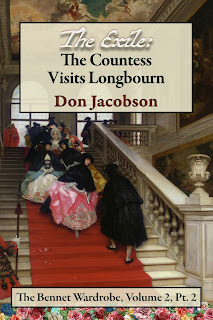 Kitty pondered her cousin Frederick’s discussion of the entail that had been of monumental importance throughout her childhood. Yet, through the paradox of her trip to the future and then her return today, she knew what Mr. Hunters did not and could not…that, while Longbourn was indeed destined to be inherited in a few years by the current generation’s William Collins, an oleaginous specimen to be sure, he would never possess it. That would be left to a completely different Collins, the offspring of the match between him and the former Charlotte Lucas—little Maria Rose.

Yet the fear of being thrown into the hedgerows had so shaped Mama’s behavior that she impressed it upon not only the youngest daughters but also the entire neighborhood. The inference that Bennet girls were desperate to marry was ultimately used by both Miss Bingley and Mr. Darcy to cast doubt upon Jane’s feelings for Bingley.

Kitty cleared her throat and stated the obvious, “Well, Cousin Hunters, the events of the past day have surely reduced that overwhelming worry. Four of the Bennet girls have found their mates, either in this time or another, leaving only Mary to tend the home fires. And, I can assure you that Mary will be all right.

“Now, however, we must be concerned about the Wardrobe and its fate, although the simple fact that I was able to translate to 1886 indicates that we found a satisfactory solution.

“As I mentioned, I am Keeper in my time. As such, I would task you to undertake this business as the Wardrobe’s advocate. The furniture is just that to all but those of us who know its secret. It, however, has no voice that we can hear, so we must speak on its behalf.

“If I am not mistaken, Master Gibbons’ Wardrobe is not part of the remainder which encompasses all of the real property that is Longbourn and is subject to the entail.
“Rather, it is personal property which may be bequeathed to any of my father’s daughters. And there is only one who can be considered: Mary. [1]

“Please urge my father, when he comes to Town to finalize the paperwork for the Bennet Family Trust, that he should name Mary Keeper. I, too, in my own manner will push him in that direction, as I am certain that he has not given it any thought. He must also stipulate in his Will that the Wardrobe is a keepsake that belongs to Mary. Furthermore, she must immediately remove it from Longbourn before Collins takes possession.

“I would encourage you to contact my Uncle Philips in Meryton who handles most of Papa’s country business.”


[1] For an excellent discussion of Regency-era entails, please see Regina Jeffers’ blog post Inheritance and the Need for a Widow’s Pension in Jane Austen’s Novels published 11/6/17
at May 01, 2018